There must be a detailed plan for how a team operates in its defensive zone when the opposition is attacking (has control of the puck) or when possession of the puck is in doubt. Unless this system is clearly understood, constantly practiced, and thoroughly implemented, the defensive team will surrender far more quality shots than need be, thus resulting in more goals allowed and, ultimately, a higher percentage of defeats.

A coach could choose to employ a system in which only one man (this player could change) is always outside the slot (see Diagram 1) pursuing the puckcarrier, while the other four skaters (who could rotate and change positions as the puck moved) would organize a box, such as is used in penalty killing. (Refer to my article entitled The Box Plus Chaser).

However, another system (less regimented defensively but with fewer lockdown features) can still be successful and is easier for players, especially beginners, to comprehend.

Generally, in this system, each defender is assigned a zone of coverage and should either attack the puckcarrier if this opponent is nearest his zone or should move to the area of his zone closest to the puck (without overlooking his responsibilities of coverage within this space) if said defender is not the one or among those fighting for the puck. (See Diagram 2 for each player’s approximate zone of coverage). 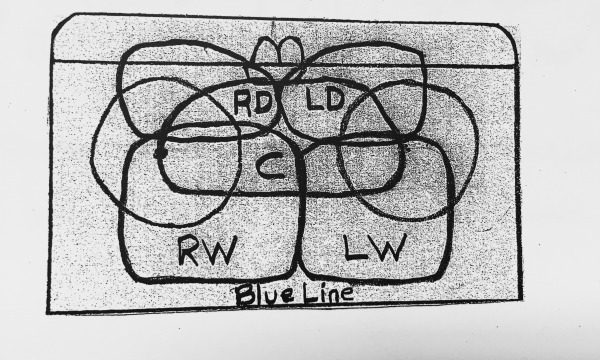 This coverage always involves two men challenging the puck, except for when the opponent has it at or near the point with no teammate around him. If two defenders are pressuring the puck below the point, there must always be at least one defenseman in front of the net, one player higher in the slot on the side of the ice where the puck is (forming a barrier on that side with the defenseman), and the far wing should move into the high slot, approximately even with the middle of the net, in order to provide coverage here and still be aware of any far side responsibilities.

As the puck travels around the zone, the two nearest defenders should move promptly to it, unless as specified previously, the puck moves to the point where the opponent is alone. This common sense rotation should always be in the quickest and shortest fashion, sometimes resulting in the center covering the point, while the wing on that side is lower. Diagram 5 shows coverage after the defenders have moved according to the dotted arrows in Diagram 4, while Diagram 6 shows the rotation of the defenders as the puck is being passed behind the net.

Diagram 7 shows coverage after the attackers and the defenders have moved according to the dotted arrows in Diagram 6.

Under such a defensive system, the slot will be tightly covered as the defenders adjust to the positioning of the attackers. The points would seem to offer the best opportunity for a shot on net. However, the greater danger of a shot from the slot necessitates concentrating coverage in this area, and defenders can provide coverage of the points by anticipating this responsibility, employing shotblocking, and remembering all other defensive tactics. The most that an opposing defenseman should be able to do if he receives the puck is quickly to shoot it toward the net without being fully set, and this is far more preferable to the defense than the alternative of allowing an opening in the critical central area. Furthermore, unlike what I have diagrammed, the attackers are likely to have two forwards challenging for the puck or organizing a play outside the slot. Such tactics would accordingly ease the burden of slot coverage and enable the defenders to cover the points more closely.

The defensive zone coverage that I have described expands upon the system in which coaches simply instruct the wings to cover the points and the center to patrol the slot. If this is all that is said and done, the attackers will surely exploit the openings that will exist. One must explain the sophistication needed beyond simply covering one’s man or a general area lest a defender believes that he has only that one responsibility and none elsewhere as the puck moves and the attackers change position. All defenders must be aware of the total picture and not just an independent role because one united entity functions better than five separate portions which added together total one, but do not equal it.