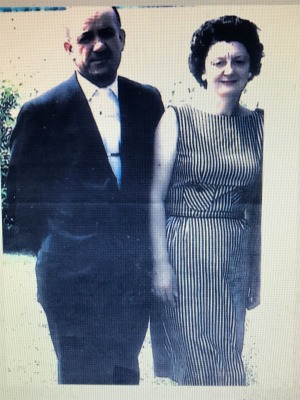 Ann Stella and Tony Odierna met in the late 1930’s and were married on October 12, 1939 at their beloved Our Lady of Mount Carmel Church in Springfield, MA. Both were children of Italian immigrants and had experienced extreme hardships as they grew. Yet, they persevered to overcome their difficulties, and each graduated from high school, whereupon both entered the workforce. Further education was unattainable due to economic limitations and family obligations.

After marriage, Tony left two babies behind to serve overseas in World War II, during which time he was wounded twice and earned several medals. After his recuperation, Tony and Ann established their family in Springfield and continued to devote their lives primarily to each other and their two children (and eventually their two grandchildren). The sacrifices they made, especially for family but also for others, were ceaseless, numerous, and very substantial to the extent that Ann and Tony deprived themselves of many benefits.

These two individuals were altruistic and considerate people who understood that kindness and assistance to others is critical and that it is everyone’s responsibility to provide and promote community service because any of us could quickly become deprived and/or dependent in a serious way. Ann and Tony certainly demonstrated important virtues!

This award honors the spirit and memory of these two marvelous individuals and parents so that their names will publicly (as they are privately with their loved ones) be linked with the goodness and generosity they always championed and exhibited. Those who work to reflect the important American ideal of nation building through community service, as did Ann and Tony Odierna, certainly deserve the highest praise as they positively impact society.